The Shock and Gas Dynamics Laboratory performs research on thermal-fluid dynamics problems with specialites in optical diagnostics and explosively-driven flows.  The research laboratory is supervised by Dr. Michael Hargather.  The lab employs both graduate and undergraduate students, who work with Dr. Hargather on funded research projects. 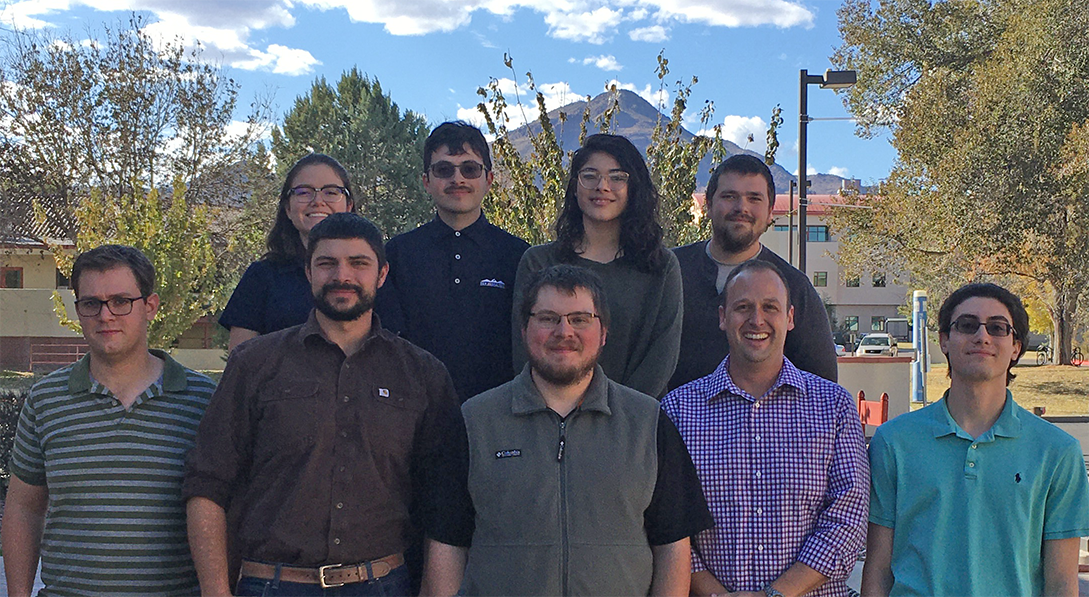 Current Job Opportunities in the SGDL

The primary research interests of the SGDL include:

Current research is funded by:

The SGDL specializes in the application and development of optical diagnostics for studying refractive flowfields.  Any flow with refractive index differences originating from temperature, pressure, density, or species gradients can be visualized and studied with these techniques.  The general class of techniques was recently reviewed in a paper coauthored by Dr. Hargather. 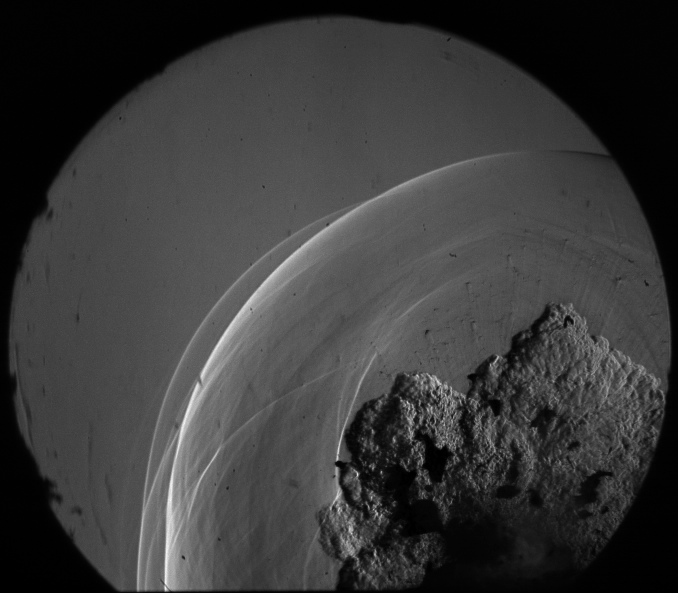 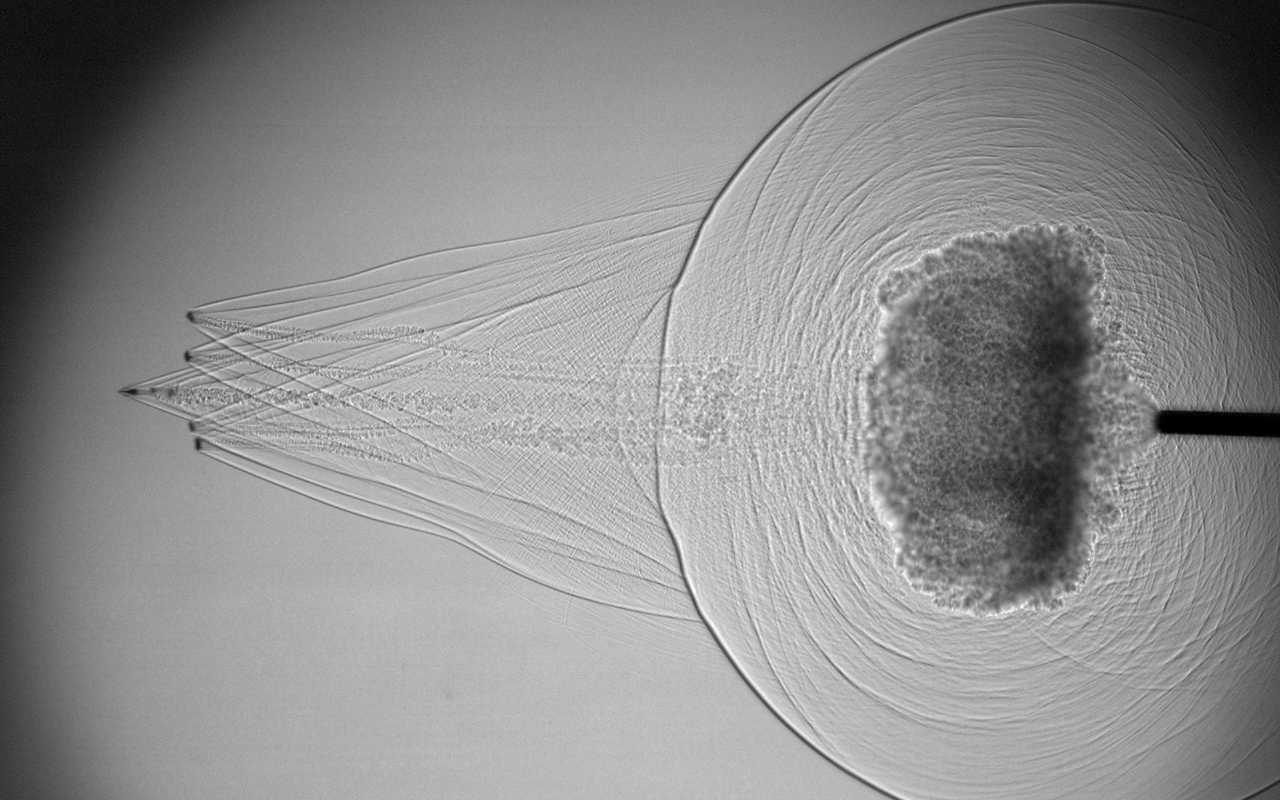 Retroreflective shadowgraphy is used  to visualize the second-derivative of refractive index fields in the imaged area.  This technique reveals sharp changes in refractive index, allowing visualization of shock waves and turbulent structures as well as contact surfaces.  The image shown is of a sabot-launched rifle projectile, showing the oblique shock waves on the projectile and sabot pieces, circular muzzle blast, and product gas cloud.  The retroreflective shadowgraph system was designed to be used outdoors and provides detailed visualizations at sizes in excess of 1m field of view in outdoor conditions. 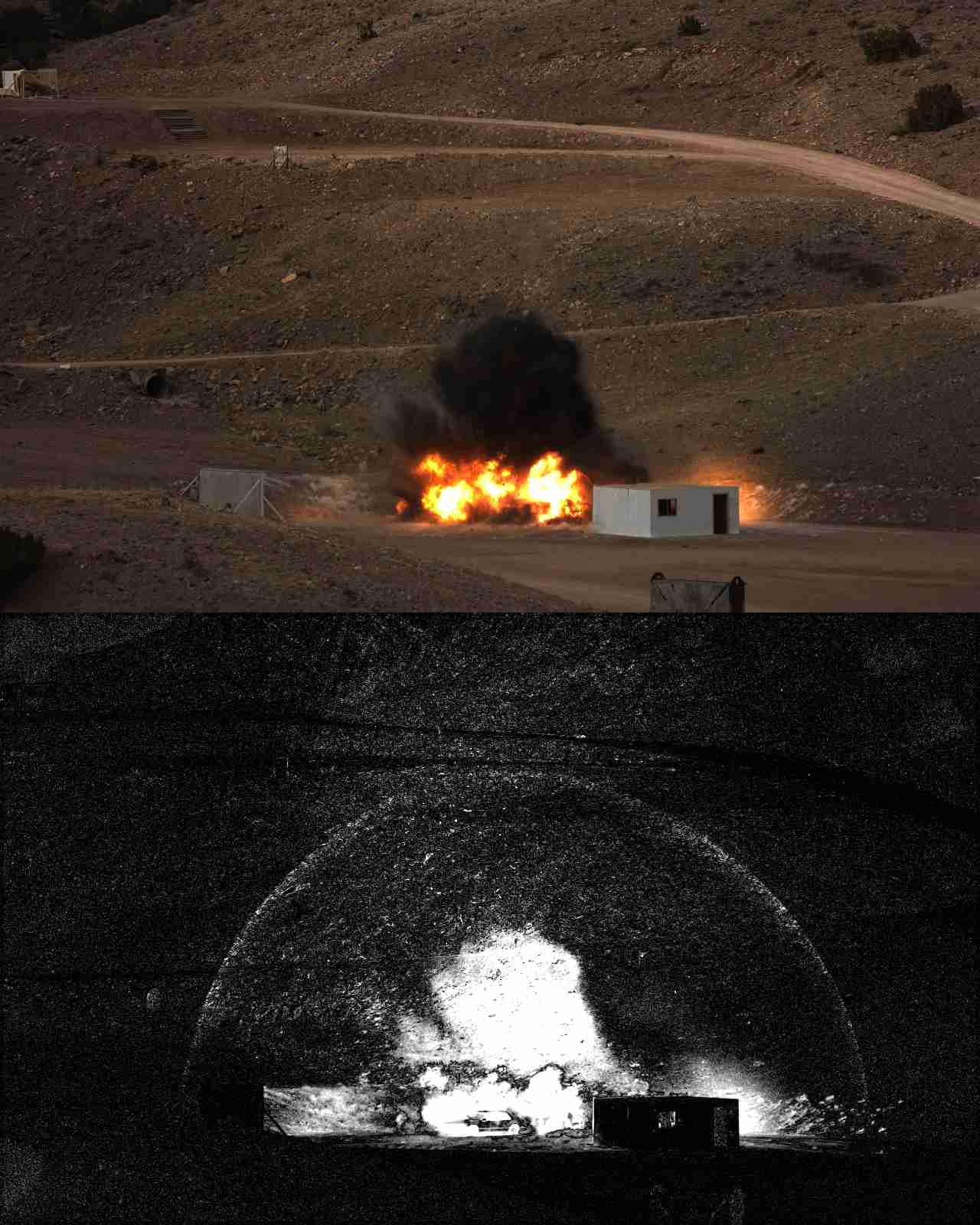 The background oriented schlieren (BOS) technique is a digital method used to visualize refractive disturbances via their distortion of a background pattern.  The technique is used here to visualize large-scale explosion phenomena like the car bomb shown.  High-speed images of the explosion process are recorded, then processed using a range of digital image processing techniques to reveal locations where the background has apparently changed due to a refractive disturbance.  The processing method here visualizes the shock wave from the explosion as well as fragments produced.  The techniques is optically equivalent to schlieren and has a broad range of applications across the laboratory and field scales.

The optical techniques used by the SGDL can be applied in many unique methods to extract quantitative information from density fields, to object motions, to measurement of velocity fields.  One example is the schlieren image velocimetry (SIV) technique which is used to measure velocity fields similar to the more conventional approach of particle image velocimetry (PIV).  The SIV technique tracks "particles" that are the naturally-occurring refractive-turbulent eddies in the flow which are made visible through schlieren imaging. A sequence of schlieren images are recorded then image processing tracks the motion of the flow features to determine the local velocity fields. This technique works well for turbulent flows where density, temperature, or species gradients exist, as in compressible and combustion flows. By using the naturally-occurring refractive-turbulent eddies, we are able to obtain seedless velocimetry with SIV.

The SGDL laboratory space is located at the Energetic Materials Research and Testing Center (EMRTC), located adjacent to campus in Socorro, NM.  The laboratory includes EMRTC Lab 4 and Lab 7, which are attached to the main EMRTC building.  These labs are used for the development of optical techniques and small-scale explosive research.  Additional laboratory space is also maintained on the EMRTC Field Lab for larger-scale explosive testing including, ballistic research, rocket testing, and free-air-blast research.

The EMRTC field lab includes over 40 square miles of space with more than 30 individual test sites to conduct explosive research and testing.  The EMRTC is a part of New Mexico Tech and assists with all energetic testing in the SGDL.

Graduate students that have previously worked in the SGDL include: