Socks in the Frying Pan & Altan 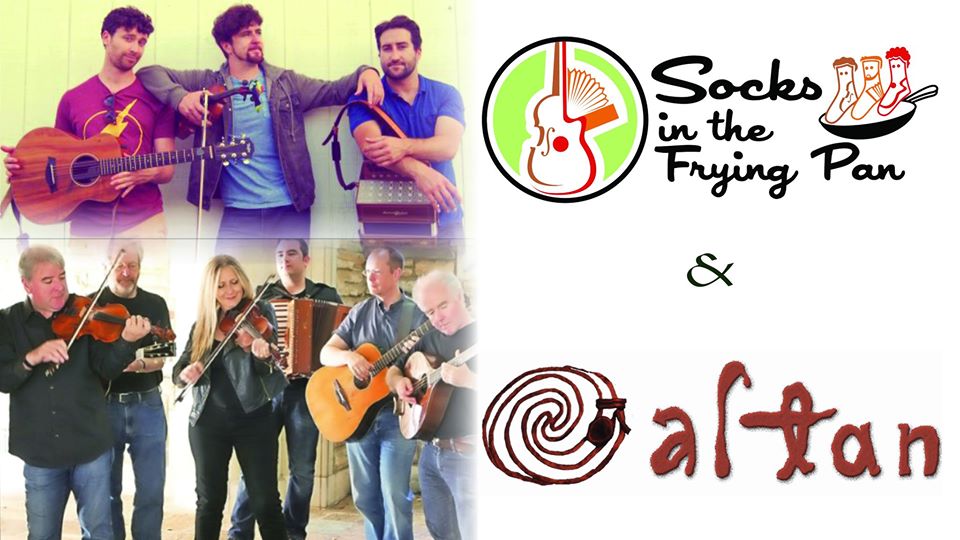 About Socks in the Frying Pan
Their dynamic vocal harmonies, virtuosic musical ability and their onstage wit has captured and captivated audiences the world around. One of the most sought after groups in Irish music today, the worldwide ‘Sock Invasion’ continues!

Socks in the Frying Pan are comprised of Aodán Coyne on guitar and vocals and the accomplished Hayes brothers--Shane Hayes on accordion and Fiachra Hayes on fiddle & banjo. This youthful trio blend Irish traditional melodies with their own personal flair which has gained them critical acclaim and accolades including ‘New Band of the Year’ by the Irish Music Association. The group have been embraced in the United States, having been booked by every major Irish festival and praised for their modern traditional style and energetic approach to music. They have a clear love for live performance which only compliments the traditional essence in their shows and makes for a truly unique form of entertainment.

About Altan
With a career in Irish music for 35 years, Altan has achieved legendary status in a genre that has been equally shaped by the band’s influence and genius.  Audiences from Ireland to Japan to Australia to Europe have embraced their heartwarming, dynamic live performances and their exquisitely produced, award-winning recordings.  Over a dozen releases to date, ranging from the most touching old Irish songs to hard-hitting reels and jigs.  Altan’s newest release, The Gap of Dreams (2018 Compass Records), follows their acclaimed 2015 album on the same label, The Widening Gyre.

Altan have moved audiences from Donegal to Tokyo to Seattle. Throughout, there has been the unwavering commitment of the band to bringing the beauty of traditional music, particularly that of the Donegal fiddlers and singers, to contemporary audiences in a way that brings out all its qualities and destroys none. In fact, Altan have always believed that Irish traditional music is a modern music in every sense and its growing influence and popularity have proved them right.

Adding to their long list of awards and honors, fiddler, singer and founding member Mairéad Ní Mhaonaigh was the recipient of the Gradam Ceoil/Traditional Musician of the Year in 2017.  Though the band received the same award for Band of the Year in 2001, Mairéad was glad to be recognized on her own in a genre that has been slow to recognize female musicians.  She is only the third woman in 20 years to receive the main award.

The seeds of the band lie in the music and fun of gatherings and sessions in kitchens and pubs in Donegal where virtuoso music was heard in an atmosphere of respect and intimacy - it is here that the band's heart lies still whether they are performing on tv in Australia or jamming with Ricky Skaggs on the west coast of the United States.