THE COMPLETE WORKS OF WILLIAM SHAKESPEARE (ABRIDGED) by Vortex Theatre 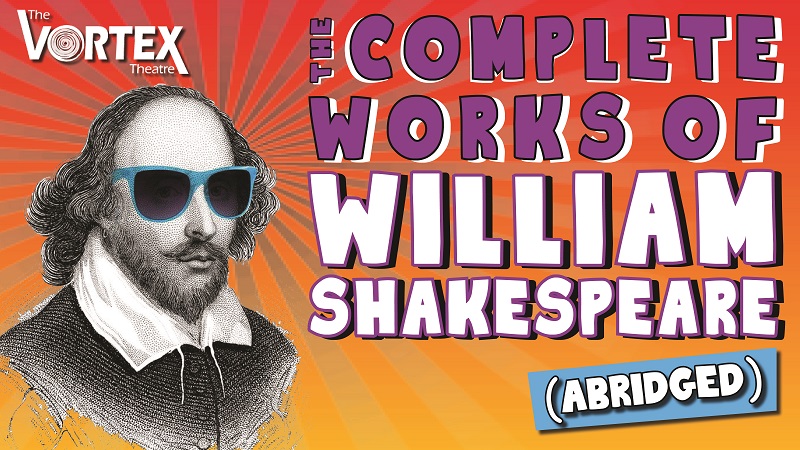 About the Show
An irreverent, fast-paced romp through the Bard's 40 plays. A little politics, a little audience participation and a whole lot of fun. 40 plays + 3 actors + 2 hours = A fun and funny, great time.

About the Theatre
The Vortex, Albuquerque's oldest continuously-running Black Box Theatre, has been a pioneering venue for classic, contemporary, and cutting-edge theatre since 1976. The theatre continues to entertain audiences with some of the city's finest stage productions, from local and national premieres to new interpretations of classic works.

Review from Albuquerque Journal by Matthew Yde
ALBUQUERQUE, N.M. — I saw “The Complete Works of William Shakespeare (Abridged)” about 10 years ago in Miami and thought it was a hoot. The madcap spoof on Shakespearean pretentiousness and academicism by Adam Long, Daniel Singer and Jess Winfield has now been updated to incorporate references to the Internet age, and is even funnier; especially as masterfully performed by Ryan Jason Cook, Daniel Cornish, and Caleb Ramsell in the production currently playing at the Vortex Theatre.

Whether you love Shakespeare, find him boring and unintelligible, or have never seen a Shakespeare production, I highly recommend you see this show before it closes. This manic parody of all things Shakespeare will have you falling out of your seat laughing.

The three actors play earnest young men who wish to enlighten the audience on the greatness of Shakespeare, and appropriately enough begin with a “lecture” on the bard; Ramsell is asked to do the honors and pulls up Shakespeare’s Wikipedia page, but after reading for a minute or so he accidentally pulls up a link on Hitler, not realizing he’s reading about the wrong guy. I would say this sets the tone for the non-stop gags to follow, but the gags are relentless and start long before this; in fact, before the show even properly begins. The three actors proceed, as promised, to act all of Shakespeare’s plays in under two hours. (But since all Shakespeare’s comedies are written according to formula, they can knock out the comedies in “one fell swoop,” to use an idiom Shakespeare himself coined.)

Ramsell, who is hyperactive and needs to stay away from sugar, plays all the female parts. I can only liken him to Ted in “Bill and Ted’s Excellent Adventure,” although the comparison is less than perfect. As Juliet, he hears the line, “call me but love and I’ll be new baptized” he can’t continue because he hears the words “butt love” and is reduced to childish laughter.

It’s hard to believe a show made up of so many of Shakespeare’s lines is so purely a specimen of current popular culture. While the characters in this play are goofballs and totally contemporary, they must also be able to recite Shakespeare’s language.

In fact, approaching this material with such carefree abandon seems to release the power of the language in a way often lacking in serious productions of Shakespeare’s plays. The meaning and musicality of the language is always present, no matter how crazy things get. There’s even a moment when Ramsell recites the famous “What a piece of work is man” speech mechanically, just to get it over with; yet after a few seconds he falls into a simple and honest declamation, and he and the audience are struck by the beauty and intellectual power of the language.

Cook not only performs but is director, set designer, and set builder as well. His set is not only utilitarian but beautifully reminiscent of theatrical history. Nick Tapia’s light design is outstanding; I don’t recall ever seeing such an eerie green hue on the witch’s face in “Macbeth.” Beautifully done. Masterfully performed.

This is theater at its best. Don’t miss it.