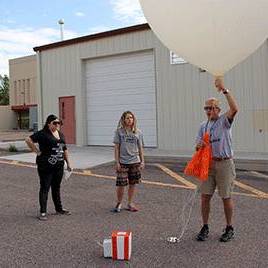 Storms in the tropical Pacific Ocean can drastically alter the composition of air over Socorro, according to a recent study completed by faculty and students from NMT’s Physics Department.

In a paper published in Geophysical Research Letters in November, Tech researchers analyzed data from the 2013 SEACIONS (SouthEast American Consortium for Intensive Ozonesonde Network Study) field campaign. Click here for the full article. This campaign involved a network of observing stations, including one in Socorro, where instrumented balloons were launched to sample atmospheric composition, temperature, and winds.

Dr. Ken Minschwaner and Dr. Gloria Manney, led the New Mexico Tech study, along with students Zac Lawrence, Bethany Sutherland, and Luis Torres and scientists from both NOAA and NASA.

“It surprised us to see how low the ozone was in the upper atmosphere,” Minschwaner said. “Having lots of stratospheric ozone is a good thing, but we were looking in the troposphere, which is a bad place for ozone because it is a major pollutant and greenhouse gas.   There are very few locations on Earth where you can find ozone as low as what we found over Socorro. Another place is near the surface in the middle of the ocean where the air is very clean, far from cars and other emission sources.”

The researchers used balloon measurements, satellite data, and sophisticated meteorological models to trace the signature of Hurricane Henriette, a category 2 hurricane that formed and dissipated in the eastern and central Pacific (about 3,000 miles from Socorro) in early August 2013. Balloon instruments launched from campus measured atmospheric ozone amounts at altitudes between five and 10 miles above the surface that were extremely low compared to those typically observed at that height.

Their findings have important consequences for the amount of ozone and other trace gases found over remote continental locations such as Socorro. Tropical convection associated with Henriette pumped surface air with very low amounts of ozone to high altitudes. These pockets of low ozone were transported by a strong subtropical jet stream that moved the air from the vicinity of Henriette to the upper atmosphere over Socorro in a matter of days.

“It took a hurricane and very strong storms and the right orientation of the jet stream to move that clean air over New Mexico,” he said. “One reason we are interested in ozone in the troposphere near the surface is that it’s a pollutant. It those layers had been pushed down, we’d have had very clean air at that time.”

Oftentimes, the opposite happens – high ozone in the atmosphere is pushed downward, resulting in bad air quality. Ozone – while important to the stratosphere – is toxic. The International Panel on Climate Change identifies tropospheric ozone as the third most important manmade greenhouse gas, after carbon dioxide and methane.

SEACIONS was designed to study the impact of storms and deep convection on the redistribution of pollutants (such as ozone) and aerosols throughout the atmosphere. The campaign was part of a broader, NASA-sponsored field mission that also involved high-altitude aircraft measurements over North America, called SEAC4RS.

No other cases of hurricane signatures in upper atmospheric ozone were observed over the six-week duration of the SEACIONS campaign. However, given the frequency of tropical storms and hurricanes in the Pacific Basin and the recurring nature of this pattern of the subtropical jet stream, it is possible that events such as this are more common than previously thought.