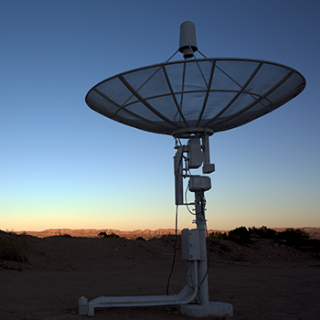 New Mexico Tech has added another exceptional instrument to the Etscorn Observatory. The 10-foot radio telescopes add a new dimension to the facility’s capabilities.

The Etscorn Observatory is already among the most impressive student-run observatories in the nation, with nine fully-instrumented optical telescopes. The 10-foot radio telescopes add a new dimension to the facility’s capabilities. The two telescopes, which resemble satellite dishes, act in tandem to produce fringes – or radio images – of distant stars, galaxies and the nucleus of our Milky Way.  A third telescope is under construction.

“The NRAO has been very generous with giving us observing time on the Very Large Array,” said Physics Professor Dr. Dave Westpfahl. “But they won’t let us take it apart. With this, students can take it apart and learn about the engineering behind radio astronomy, as well as do real interferometry.”

The ribbon-cutting marked the official unveiling of a small new building where students have access to telescope controls and data storage. NRAO summer student Linnea Saby welcomed Tech’s top administrators, faculty members, Tech students and local children into the building to explain how the telescopes work.

“This is a unique instrument,” Saby said. “I’m really happy that we’ll be taking advantage of this again. For a motivated, mathematical-minded student, you can really learn how to do radio astronomy and interferometry.”

The new instrument will be put to use immediately in labs that are required for students pursuing the Astrophysics Option with a Bachelor’s in Physics. The facility will also be available for astronomy outreach efforts to local school children and open to community members during star parties.

The project was spearheaded by Lory Wingate, project manager at the National Radio Astronomy Observatory headquarters in Charlottesville, Va.

“This has been a passion project for me,” Wingate said. “I heard about this opportunity to enhance and expand science in January. It took a lot of sweat equity … now we have an excellent opportunity for students to add to their intellectual knowledge.”

Wingate organized two teams of students to refurbish the two radio telescopes that had fallen into disrepair and hadn’t been used in years. One team did preparatory work during the Spring 2016 semester in Virginia. The second team – led by Saby – has spent the past two months in Socorro getting the telescopes operational.

“This has been a great collaboration between New Mexico Tech and the NRAO,” Saby said. “My hope is that NMT and the NRAO can coordinate the maintenance. The main point is to keep this as an interactive museum exhibit.”

The original two dishes were built in 2003 from kits designed at M.I.T. They were initially damaged in the October 2004 hailstorm and suffered further over the years from neglect. The M.I.T. kits are no longer being made, so students relied on their ingenuity to refurbish the dishes. They will also have to build the third dish from scratch. Saby said New Mexico Tech students and NRAO staff will collaborate to build the third dish over the next six months.

Tech professors and NRAO project managers oversaw the work, but students did all the heavy lifting. In addition to the NRAO summer students, numerous Tech students volunteered to work on the project. Isaac Williams, president of the Tech Astronomy Club, organized volunteers and did a large amount of work to get the dishes operational.

The ribbon-cutting also marked the unveiling of two other new instruments. Tech has a new Radio Jove telescope from NASA, which is designed to study Jupiter, the sun and the galactic nucleus. The Society for Amateur Radio Astronomy donated another radio instrument, Super SID, which monitors the Earth’s ionosphere for signs of solar flares.