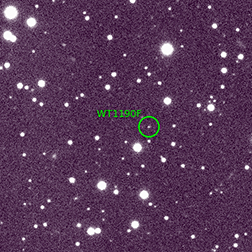 Astronomers at the Magdalena Ridge Observatory recently assisted NASA and SETI track a piece of space junk with the 2.4-meter telescope as it impacted the Earth over the Indian Ocean near Sri Lanka on Friday, Nov. 13. Within hours of that project, the MRO team also tracked an asteroid that passed within the zone of Earth-orbiting communications satellites on November 14.

“We were doing the work as part of a world-wide collaborative team as a test case for future scenarios to deal with hazardous asteroids that may impact the Earth,” said Dr. Eileen Ryan, director of the 2.4-meter telescope. “The team got some neat pictures from the airplane of the debris streaking as it came in.”

The object was WT1190F, and a plane in Abu Dhabi was chartered to get images and data as the debris hit. Dr. Bill Ryan, telescope scientist at the MRO, provided NASA’s Jet Propulsion Lab with astrometry to refine the error bars to help determine exactly where the debris would impact. The astrometric data provided by MRO for entry location modeling helped reduce an impossibly large uncertainty to a doable, large uncertainty which was very encouraging.

The space debris had been identified in late October and observers had determined that it would impact the Earth on November 13. Observers on the airplane took video of the space junk as it appeared to burn up. Eileen Ryan said that if any portion of the debris survived re-entry it would be in the Indian Ocean off the coast of Sri Lanka. For more information and images of the incoming debris see: http://impact.seti.org/ (scroll down to the middle of the page for MRO’s early, critical astrometry contribution).

As observers were tracking the debris, an asteroid was discovered that would pass very close to the Earth (within the man-made satellite zone) the next night (Nov. 14).

The Ryans got data on the object’s spin rate, and took a picture on Nov. 14 of the asteroid in the background with an (unresolved) image streak of a known geosynchronous satellite in the foreground (though safely far enough away this time).

“I was surprised,” Eileen Ryan said. “It was a one-two punch. One cool thing, then another cool thing. The International Astronomical Center in Abu Dhabi together with the United Arab Emirates Space Agency chartered a plane to track the space junk. Then, 20 hours later, we’re seeing an asteroid within the geosynchronous satellite belt. That took Bill and me by surprise.”

Dr. Van Romero, Vice President of Research at Tech, said the positive results on these two back-to-back projects are further proof that the MRO is a top-drawer telescope.

“This facility was designed to be able to do quick response and this is yet another example of how the facility – combined with the people who operate the facility – can respond quickly and do things that challenge the rest of the world’s observatories,” Romero said. “The facility can’t do it alone. You need skilled people who can do the measurements and do it quickly. The combination of the facility, plus Bill and Eileen Ryan, appear to be the best in the world. That’s why NASA, the Air Force and the National Science Foundation are beating a path to their door to take advantage of the capabilities we have at Tech.”

The asteroid – named 2015 VY105 – was first discovered by astronomers at the Catalina Sky Survey in Tucson. Within the hour, the Ryans were using the MRO 2.4-meter telescope to track it further.

“Catalina found it as a dot,” she said. “As a follow-up telescope, we lengthened the arc of the orbit of that dot and figured out how close it was coming to Earth. Bill did a quick orbit calculation and it was getting kind of close, but looked like it was safely not going to hit us. It was a bit unnerving, but it’s a great opportunity. We’re in the middle of a shooting gallery.”

Once it became clear that this asteroid was coming close, the Ryans put out a call to their European colleagues to assist in tracking while it was daylight in New Mexico. Although it was not going to hit the Earth, its close approach was going to provide a great opportunity to study these types of small asteroids that are on a collision course and lead to the events like the airburst over Chelyabinsk, Russia in February of 2013. Most observatories had bad weather, but three stations from Romania, France, and Italy were able to help.

“This is a beautiful demonstration of how – with little warning – we can use worldwide resources on something that could be potentially hazardous,” Eileen Ryan said. “It’s heart-warming to get international cooperation and find people who are willing to work together and do it quickly.”

The asteroid came within 10 percent of the distance between the Earth and the Moon, or within about 18,600 miles (30,000 km) of the Earth. It was traveling at about 17 kilometers/second in its orbit, and was 5 to 10 meters in diameter. The Ryans were able to observe it tumbling while spinning once every two minutes. Analysis of the collected spectral data will help determine the asteroid’s composition.

Eileen Ryan said the asteroid was so close and so bright that even smaller telescopes could track its path. Two students are helping make sense of the data. Heidi Love, who recently got her master’s degree, is assisting in understanding the fundamentals of how asteroids break up, along with Travis Crockett, a senior in physics, who is analyzing man-made satellite observations. Crockett and Bill Ryan plan more space debris monitoring in the wake of that incident.

Romero said, “This is an extraordinary opportunity for students to learn the techniques, but to also participate in cutting-edge research – real-time, right-now science.”